Pieces of Her Review

Pieces of her by Karin Slaughter.

‘ …Andy’s head slammed into the window as she was tackled to the ground. She felt the rush of air from her mother’s mouth as the wind was knocked out of her. Andy’s vision blurred. She could hear a cracking sound. She looked up. The glass above her had started to spiderweb….’

What is Pieces of Her about?

Pieces of Her explores the impact of old secrets when footage of Andrea Oliver’s mother, Laura, stabbing a man goes viral. Andrea’s quiet life in Belle Isle is upturned when her mother’s actions lead to a man tracking them down and trying to kill Laura. Soon Andrea is asking herself whether Laura wants to protect Andrea, or keep the secrets of her past hidden?

The lines of right and wrong are blurred as Andrea learns more about who Laura was before she became Andre’s mother, but will they survive the secrets, or will Laura’s past destroy them?

Fans of Karin Slaughter have another page turner to sink into.

What did The Book Reviewery think?

Karin Slaughter has continued to grow as an author, with increasingly complex but relatable characters that make her books great to read. Initially, I wasn’t sure whether I would enjoy this book, as it slowed a lot after a fast-paced opening, but it picked up again with the reluctant protagonist, Andrea, trying to uncover who her mother really is, and why there are people trying to kill her.

In order to return home, Andrea needs to find out why someone wants Laura dead. At its heart, Pieces of Her is a suspenseful tale about who we are and who we become, and which elements of each we choose to share with those around us.

Our Kind of Cruelty 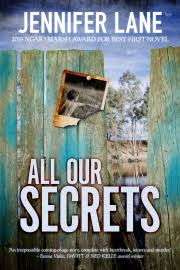